Tweaking of our Bruce Miller guided Income-Only portfolio continues. In my last post I did not classify holdings by Income Group properly. I have modified Miller’s groups to add an “Other” group which suits my spreadsheet use a little better.

With those changes incorporated into my SS, here is a breakdown of our 2 taxable and 2 retirement accounts that are using his strategy:

It seems my goal of a minimum 5% yield is going to be achievable without too much difficulty. This does require me to go out a little on the risk curve, but even considering the huge losses in legacy stuff, the current holdings are yielding just over 6% at cost….. Ignoring the Legacy and Spec categories (not part of Miller’s strategy), we are only using 4 Income Groups and need to add more diversity.  There’s plenty of cash, so it’s just a matter of identifying inclusion candidates and deciding when it’s time to buy. Eventually, of course, the legacy stuff will be sold and replaced with more stable investments.

Building an income-only portfolio turns out to be hard work. I had thought a few ETFs or CEFs might be sufficient, but it turns out those animals don’t pay or hold up as well when back-tested. Eg. SDIV and DIV, which I hold in high regard, just don’t produce the capital gains needed to keep pace with inflation over the long term. So I’ve resolved to add some individual issues mixed in with the more diversified funds.  I’ve already got a start on some mREITs and hybrid REITS preferreds during the Jan-Feb puke, but they are categorized as “BondPfds” rather than REITS by Miller (for good reasons- and he doesn’t like mREITs at all). My spreadsheet made CLNY look pretty good in light of the recent merger news sell-off (which seems overdone to me -check out the VF stock rating page for some good summaries by stlbeerman & NAL), so I bought some of this Wednesday.

Today, I decided to look into REITs & see if I could find some interesting income candidates.Today, The focus was on property/equity REITs. There are a zillion screeners out there. The Aristocrat & Champion lists seemed limited to me, so I started with http://www.dividendyieldhunter.com/real-estate-investment-trusts-reits-sorted-alphabetically/

Then I sorted it by REIT Sector and deleted all “merged”, “liquidated”, “suspended” or “acquired” REITs, leaving me with 221 exchange listed REITs.  I wanted to focus on sectors that are more immune to economic slowdowns, so focused on

And eliminated rows with most other categories of REITs for various reasons - mostly because I was not confident they would do well in a recession. I may be wrong about that, but it’s what I did, anyway.  After a little more massaging, I also eliminated all the “Mixed” REITs because there were just too many of them & figuring out what they held would take forever.

This left me with about 35 REITs, including VNQ, the only ETF of the bunch. I resorted them by dividend yield.  Here is the resulting list: 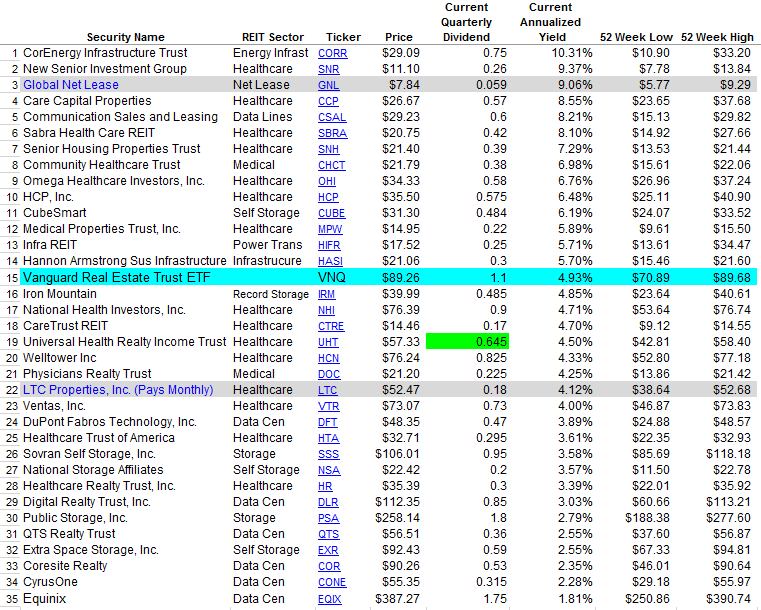 This was still a lot to digest, but I resolved to run every one of them through my RIP dividend evaluation spreadsheet, along with some mentioned in recent VF posts and 4 that were identified by Schwab’s stock screener (which is pretty good, BTW), which also popped out of the dividendyieldhunter screen.

The RIP spreadsheet has been enhanced with a few columns of additional data that helps in determining valuation and purchase price, and a feature to allow each REIT run to be compared with the others in a convenient table format. Each ticker evaluation pulls data from Yahoo & morningstar to determine price & dividend trends plus dividend sustainability & safety.  Then it allows me to do some simple web research & save each ticker’s result to a table for later comparison.  I’ve attached  copy of the spreadsheet output. You can sort & play with it.  The Schwab identified REIT tickers are in RED. Not surprisingly, REITs with the best dividend safety tended to have the lowest yields. Storage of any kind is pretty popular, especially the data centers.  Unfortunately, everything seems a bit high priced to me, especially the data center REITs. Seems like a market over-done fad right now. So I’ve just saved a few names in my Schwab alerts to notify me if they drop to a better price.

I’m not satisfied with the dividend “safety” algorithm & plan to tweak it a little. I also have a few other enhancements in mind to make data comparison and recall easier and faster. The brute force screening with something like dividendyieldhunter is a little labor intensive, so in the future I’ll probably use a Schwab or other screener to narrow investment candidates down before running tickers through the spreadsheet for analysis.  I need to work on some other investment income groups & will likely look into insurance & consumer staples next.

Just what I have been doing with Miller’s income-only strategy.